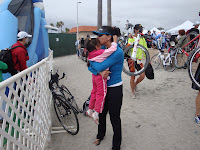 My niece and I arrived to the Oceanside Beach Community Center in the late afternoon on Friday to pick up my packet both excited to visit our first official Ironman sanctioned expo. First, we picked up my race packet in the athletes only area zone, and they allowed Serena in because there was no one else to take care of her. She got an inside peak and was full of smiles. Many athletes commented on her adorableness. Nope she's not my daughter, but she's my blood. Second, we entered the expo to fill up on race snacks and we, of course, revisited the food giving booths several times. Call us the bottomless pits. :) After a quick scan of the bikes worth thousands of dollars and other vendor booths, we quickly made our way to the infamous Ironman Official Merchandise store where you could get your hands on any type of Ironman gear you can imagine. With a basket in hand, Serena and I just filled it up with little items such as magnets, stickers, caps, shorts, bell, and water bottles.Nothing major but still amounted to a nice price tag. Lastly, we made our way to the beach and pier to take a short stroll together under the very warm sun rays. It concerned me how quickly I got hot just walking around but I calmed my nerves knowing that the forecast predicted for race day the next day a high of 68 degrees in overcast skies. We couldn't be blessed with a better prediction.

Pre-Race Meal:
As the evening came to a close, Angela, Serena, Jayden and I had a simple but delicious dinner at Chipotle, my absolute fav. In the past, I've had some great races when I eat very generously so here we go: I ate a full chipotle salad with beans, rice, corn, and plenty of tomato and salsa, one bag of chips, and a large frozen yogurt cup with plenty of nuts and fruit. Very, very full but one happy camper. Lights out at 9:30pm.

Race Day:
Alarm was set for 4am but when it's a high stakes race my eyes open much sooner than the alarm is set. 1:30am, 2:30am, 3:30am...then at 4:00am I was wishing for another few more hours of sleep. But not today. We arrived at 5:30am and I proceeded to calmly set up my transition area after the 1mile ride from where we parked. By 6:30am, I was set up and sat next to my gear for a few moments to prepare myself mentally for the race. I needed a game plan as there were a few factors to be concerned about for today given what I had gone through recently. By 7:00am, I made my way to the wave line-up: Navy W25-29, W 50+ @7:27am with about 65 starters. Just as usual, the last half hour before game time seemed to be only minutes because before I could realize I was stepping into the cold harbor ready to commence the 70.3. Immediately, I could feel my heart rate rise tremendously which could have been the combination of adrenaline excitement for a race and shock of the cold water. I took one last look at my pink fans, Sister and Niece, sitting warmly giving me my last waves of good-luck. I'll see you ladies in a few hours...

The Swim:
We swam a few meters to the actual start and treaded water nervously waiting for our start signal. 7:27am and we were off in a frenzy anxiously to find a placement among the battling women. I placed myself towards the back of the front pack to not be stuck in the back but not be in the way of the lead swimmers. For about 100m, I swam free style with my head above the water as I didn't want a panic attack of the cold water to ruin my race as it once did in an olympic triathlon last year in March. Live and learn. Finally, I put my head in the water and attempted to find my rhythm in all the excitement. With other swimmers’ arms hitting my legs and my arms hitting other swimmers, it was a mental plea...when are we going to finally space out? After 10 minutes, I treaded water for a few seconds to find a clear path. Best scenario was to swim on the outside and swim my own race. It would be an extra few meters but it would save me the frustration from having to push and swim through these other women. Finally, I was able to get into a rhythm but then I felt the motion of the continuous waves make me feel nauseous. Or could it have been the result of exertion from the after effects of my concussion? I knew I needed to take it easy. I kept a very calm, relaxed pace till about the turn around when I then knew we were on our way back so I turned it up a notch and swam harder. I could feel my breathing pattern quicken but as a response: I hummed in my head an energetic song that entertained my thoughts temporarily. Push. Push. Push. What seemed like an hour, I climbed out of the harbor and was so happily pleased to see on my watch 42:15. I was stoked to have swam that time which was only about 2min slower than my 1.2mi time last year when I was somewhat swim trained, which indicated that if I had trained better this year then I could have swam much faster. What made me more happily surprised was I had only swam twice this entire year and I only slowed down 2min. The circuit training I had been creating for my upper body had preserved my upper body strength enough to swim the distance in a not so bad time. Next time, I will need to definitely put more swim intervals and ocean swim time to get myself down to the 35:00-38:00 split where I should be. Lesson learned: weight sessions help but are not a complete replacement. They are a supplement.

T1:
Instead of rushing, I took my time peeling off my suit which became a difficult task as it rubbed against my scabbing open wounds and large bruises still on my body 10 days after the accident. After a few whimpers, I managed to get it off and bike gear on, and I walked out of the transition area in 7:52. After finding out my overall time was 6:03:00, I was pretty disappointed that I could have easily broken 6hrs if I had not taken my sweet time here but I accepted it knowing that I was having more trouble than normal to take my wetsuit off and get dressed. Lesson learned: stay in race mode every minute of a race; that’s why it's called a race. Yes ma'am.

The Bike:
As no bike course profile had been provided, I rode blindly not knowing what hills to expect but a friend had told me expect the hills after the first half. She wasn't kidding. The first 25 miles were swiftly completed but I still held a relatively relaxed pace at an average 18mph. You can imagine there were plenty of cyclists that passed me with that pace but all I could say in my head was: I'll see you on the run... remember the back of my shirt. Ha I do not have zipp wheels. My bike isn't worth over a grand but I do have my legs and I will do my best to catch you with my legs. Mile 27, the second half of the bike course revealed itself without mercy. Hills? With over 2,000ft in elevation gain, yes there were hills. Up I went... There is no hill. There is no hill. I love this... And then the singing resumed. Humming to myself again, I didn't even realize that I was passing a few cyclists as they were struggling going up hill. Yes! My leg strength paid off here. Up over the crests over each hill felt so satisfying to see the joyous downhill we had ahead. Weeeeeee! But I did need to play it safe. I did not remain in aero position on the downhill and placed my hands on the brakes just in case. After my bike fall still with fresh wounds, I couldn't completely shake the event. I didn't go faster than 28mph. Mile 40, not too far from home and my second wind set in. I pedaled hard against the powerful headwinds and again I started passing some more cyclists. It felt good. Bike complete in 3:29:09. It's not great but I was pleased given the hills and I had survived a slightly traumatic accident in the recent past. Lesson learned: With my longest ride being 40 miles this year, I need to log in more bike mileage and not allow myself to get so preoccupied with run & weight training when triathlon training.

T2:
Quick change of shoes and a much needed potty stop, I was out in 4:58. Fixing my ponytail and visor on, I was ready for my favorite part, the half marathon.

The Run:
One step in front of the other and oh my goodness, my legs felt like they weighed a ton each. No point in slowing down, I had some time to make up and some cyclists to catch. Quickly I dropped into a 6:50min/mi pace and had to force myself to slow down because I knew my body would not hold out for 13 miles at that pace. I had ran only once in the last 10 days because of the incident, but I needed to end the muscular leg pain as soon as possible. Solution: run fast, run smart, and run strong. With a two loops out and back course, there was plenty to keep the eyes entertained but all I could think about was my breathing and form. Catch the runner ahead. Catch her. Now catch him. Mile 6 and I was holding a 7:20 average pace but then I hit a slight bit of fatigue and dropped down to 7:40-7:50. Oh no get your ass back in gear. Mile 10, I carried myself back down to 7:20, 7:10, 7:10. I'm almost done! With the finish line in sight, I heard my sister yelling at the top of her lungs: Go sister!!! Her voice cracked and I could hear her tears. I'm so proud of you sis!!! I couldn't help it, tears dropped down my face as I ran across the finish line. What a great feeling to push the body beyond what we believe it can do. I did it. I completed my 3rd half ironman distance triathlon in 6:03:00. I was a little rusty as my last triathlon was 10 months ago at Vineman but I was very happy to once again challenge myself to do the unknown. Thank you to the rest of my familia for being there in spirit for me. I love you.